To summarize the following article, a 12-year old boy got published when he recommended that his father, a psychologist at the University of British Columbia, use pictures of Dungeons and Dragons monsters to resolve a question in psychology.

Do people look at eyes or faces?

In 1998 this psychologist, Alan Kingstone, proved “that people will automatically look where others are looking”. This is probably to see what others are interested in, but are we concentrating on eyes or faces, faces happening to have eyes in the middle? A colleague of Kingstone said that this would be impossible to distinguish since, looking at the same spot, a person might be looking at the middle of a face or at a pair of eyes.

So Kingstone’s son suggested using pictures of Dungeons and Dragons monsters which have eyes in various places.

When the psychologist showed such pictures to this a group of volunteers he found that “their eyes moved to the centre of the screen, and then straight up. If the volunteers saw monsters with displaced eyes, they stared at the centre, and then off in various directions. The volunteers looked at eyes early and frequently, whether they were on the creatures’ faces or not.”

The end result being that we learned something neat from a child and his favourite monsters, and said child is now published in a journal of psychology.

4 thoughts on “On the Genius of Children and Monsters” 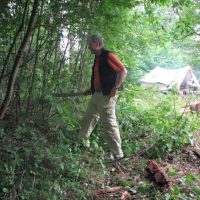